Some of my favourite tweets from #asktommyrobinson

So, today on Twitter, there was an amazing trending tag.

It was set up by Tommy Robinson - aka Stephen Yaxley-Lennon, aka leader of the English Defence League - for people to ask him serious questions regarding the EDL and their ideologies (for those that don't know who the EDL are, they are very anti-muslim and are basically massive ignorant racists who shout about being English, but don't even know how to write/speak it). 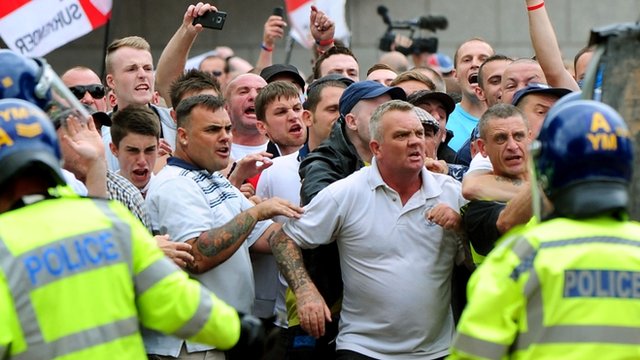 Some examples of EDL members...

This, however, did not happen. Instead it was hijacked by the Twitter community and thousands of tweets appeared, asking some pretty fantastic and hilarious questions.

I list some of my favourite tweets below for you to enjoy.

#AskTommyRobinson isn't it strange that EDL stands for 'English Defence League' yet so many of its members struggle to speak basic English?
— Jahed (@jahed_m) July 26, 2013

If you shave a member of the EDL do they grow back thicker? #askTommyRobinson
— Lisa (@BiscuitAhoy) July 27, 2013

#asktommyrobinson When the moon is crescent shaped, what's the best kind of rock or stick to throw at the night sky in impotent rage?
— Scriblit (@Scriblit) July 27, 2013

#asktommyrobinson Who's reading these to you?
— Frankie Boyle (@frankieboyle) July 27, 2013

Tommy, this morning my toaster didn't work as well as I'd have hoped. How did Islamic ideology corrupt my toaster? #AskTommyRobinson
— Peter Charles (@peter27afcb) July 26, 2013

#asktommyrobinson how do you feel about all these Muslim women covering their faces in publik? pic.twitter.com/tsp9U2fYAq
— ىاسمين (@yasmin_027) July 27, 2013

#asktommyrobinson I thank you tommy, this trend is a melting pot of different nationalities and cultures all laughing at you. Together
— Daniel Turner (@Turn_burner) July 27, 2013

And finally, a cheeky couple of my own that got a few retweets:

#asktommyrobinson My partner is a handsome, kind Scot, but should I dump him for a real Englishman like one of these? pic.twitter.com/J3h8nct8B9
— Ellen Rose (@icklenellierose) July 27, 2013

#asktommyrobinson do you realise you must keep plastic bags away from children? Oh, & your stupider EDL members... pic.twitter.com/Xhd3i7Dxiy
— Ellen Rose (@icklenellierose) July 27, 2013


Silly EDL...
Email ThisBlogThis!Share to TwitterShare to FacebookShare to Pinterest
Posted by icklenellierose at 13:41